I finally got my long-awaited C.H.I.P. $9 single board computer from Next Thing co. A lot has happened after the initial Kickstarter campaign, Raspberry Pi Foundation has released the $5 Raspberry Pi Zero, Orange Pi has sub $7 offering and other competition is on it’s way. However the thing I am mostly interested is the 4Gbit built-in mass storage and WiFi / BLE. When you add those to any other SBC the price point is beyond $10 mark.

First off you have to install the OS image to C.H.I.P. (sorry guys, from this point on I will use the acronym CHIP), the new Google Crome installer is quite handy, you just point your browser to http://flash.getchip.com/ and (a bit awkwardly) short FLE and GND pins from your CHIP and plug it in. If everything goes well you are greeted with Flasher to detect your CHIP and then the OS image selection screen.

Here is a caveat, I selected the GUI version of OS image although I intend to run the device headless (i.e. no display attached). This led to strange behaviour – the device would turn off afted a while by itself. I lost a good few hours trying to solve it before I figured out that

the device reboots when there is no display attached

I re-flashed the device with non-GUI image and the problems went away. 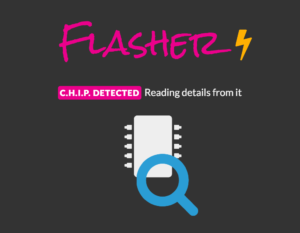 Next you will need a terminal connection to setup C.H.I.P . I am using Mac OS X and for some reason the method described in Chip forum didn’t work for me. Screen command yielded a set of garbled characters so I used command cu instead

first check what is the device name of chip

and then use cu to connect to chip

← Olimex A20 OLinuXino MICRO board first boot
Site back up! →

A word from our sponsors